I’m not sure I could have read this prior to entering the second half of my life – it’s a very ‘grown up’ book!  Joseph Campbell applied his insatiable mind to various academic disciplines and traveled extensively pursuing his passion for the human habitat of mythology.  This book is a record of several interviews that took place late in Campbell’s life with journalist and fan Bill Moyers – reading it is very like finding yourself in an unexpectedly fascinating dinner party conversation.

Mythology is fascinating.  I am struck by the persistence of the human instinct to evolve stories which explain life, death and universe.  Then the stories themselves are persistent in the commonality of their themes – love, loss, pain, joy, power and powerlessness.  Karl Jung labeled these ‘persistencies’ archetypes of the collective human (un)conscious, but for me, mythology keeps the archetypes in their most meaningful setting – stories that make sense of universal human experience.

As a Christian, I have particular stories specific to my experience of encountering God – ‘revelation’ as we like to call it in Theology.  There needs to be careful rendering around those narratives because in one sense they are mythology like all others and yet in another sense if we commit to a belief in Revelation, they take on an ‘other’, through God’s incarnation of Godself as the Word of God.  Questions of beyond-human knowing aside however, the main point of myths is to tell us something about ourselves and Christian mythology in this way operates on the same level as all cultural mythologies.  Studying mythology is another of my little projects this year, exploring the imago dei.

In the wonderful mythological themes explored by Moyers and Campbell (the inward journey; sacrifice and bliss; the hero and adventure; eternal life) the most poignant for me at this point in time were the conversations around ‘the gift of the goddess’ and ‘tales of love and marriage’.  The fact that these themes grab my attention is indeed part of the point of mythological stories – we lock on to what is relevant at the right time that it is relevant and travel with those stories swishing around in our brain for however long they are relevant!

Moyers opens the discussion on love by saying, “Love is such a vast subject that – well, if I came to you a 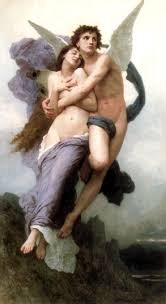 nd said, ‘Let’s talk about love,’where would you begin?” Campbell responds, “I’d begin with the troubadours in the twelfth century.” And so begins the history of ‘love as we know it’, that Jung describes as a kind of insanity!  Campbell:  “Before that [ie. the troubadours] love was simply Eros, the god who excites you to sexual desire.  This is not the experience of falling in love the way the troubadours understood it.  Eros is much more impersonal than falling in love.”  Hence, a story of love is (re)discovered for western cultures – love which leads to suffering joy.  The troubadours “celebrated life directly in the experience of love as a refining, sublimating force, opening the heart to the sad bittersweet melody of being through love, one’s own anguish and one’s own joy.”  And all this, needs to be understood alongside marriage!

There is no doubt that love and marriage need an overhaul in western culture – the old mythologies have lost their power to define relationships in meaningful ways.  My parent’s generation stayed together because the commitment to the concept/ institution/ mythology of marriage (and family) was greater than individual happiness.  My generation conflated the notions of romantic love and marriage in a way which has reduced marriage to the songs the troubadours sang, yet knew was distinct from the life-long man-woman relationship which ordered households and kingdoms.  Yet a return to the marriage mythologies of previous generations is not going to work because we have deconstructed the social systems which made those stories workable.  Marriage is dependent upon localised family supports;  confidence in distinct gender identities each with their own support systems (NB roles and identities are two distinct things);  household systems in which children can be raised by a team of people not just one or two individuals;  and sexuality with the power to evoke sacred mystery.  Similarly, Romantic Love is losing its power to transform because we have commodified it;  sterilized its sexuality;  and exchanged the notion of self-sacrifice, upon which Love depends, into self-fulfillment, upon which Narcissism draws.

I’ve given up pretending I have any answers when it comes to Love and Marriage – but I do think we could start telling each other some different non-Hollywood stories.  Personally, I’ve been (re)imagining Psyche and Eros – if that means anything to you well and good, if not… Google it – it’s a good story!

3 thoughts on “The Power of Myth: Interviews with Joseph Campbell by Bill Moyers”