I’ve just handed in a ‘Reading Reports’ assignment where I had to summarise and respond to various set texts in order to grasp something of the global trends in theology in the twentieth century.  It may be a bit clunky, but I’ve cut and paste the assignment here to give you a paragraph on some key theologians from the past 100 years.   Several of the chapters set in these reviews are from the fat brick of a book that is the subject’s text: David Ford’s The Modern Theologians.  Oh how I love Rowan Williams!!!!

Williams is an easy introduction to Orthodox Theology for Western thinkers – drawing our attention to some key differences at the outset – the more balanced approach to dualism, a stronger link to mystical traditions and a non-Enlightenment engagement with twentieth century Continental philosophy. It is accidentally convenient for Western thinkers that “for most of the twentieth century, the story of Orthodox theology is the story of Russian theology” – making the fruitful reconnection of Western and Eastern Christianity much simpler to pursue. Russian Orthodox theology in the twentieth century can be understood through it’s engagement with Soloviev’s theology of sophia in the century before. Soloviev developed sophia as a cosmology of the Eternal Feminine, Divine Wisdom, that which is uncreated and absolute breaking through to material reality in an act of reintegration in the cosmos, through the incarnation of sophia in the Divine Word. Bulgakov develops Soloviev’s cosmology with a careful description of Christ as uncreated sophia in his divine nature, created sophia in his human nature. Because they are perfected together, Christ leads the way for the church who is “sophia in the process of becoming” (p.576). Lossky was very critical of Bulgakov and saw his furthering of Soloviev as contrary to his own concern for “an ‘authentic,’ patristically based Orthodoxy” (p.578). Mediating between a “Catholic essentialism and Protestant existentialism” (p.580) Lossky embraced an apophatic approach to theology which located the task of theology in that ambiguous realm between divine mystery and human intelligence. This is the place of the Trinity and leads us into God’s complex relationality. “It is from the divine paradigm of the divine hypostases that we come to grasp our own vocation to personal being” (p.579). Unsurprisingly then, Lossky outlines an ecclesiology in a sobornost that binds together both “the institutional and the charismatic…as inseparably as the Word and the Spirit in the Trinity” (p.580). Florovsky also pursued the Patristics synthesis and was unwavering in his commitment to the Hellenism of the Church Fathers. Christianity cannot escape it’s historical particularity, of which the Hellenistic context for the earliest Tradition of the Church is primary, because all reality is grounded in historical acts. Further, Florovsky is critical of any theology that is not grounded in the historical Jesus. The eucharist becomes foundational for sobernost through it’s historical continuity. Contemporary Orthodox scholarship covers a breadth of fresh theological insights as East meets West in various combinations.

I’m not ashamed to say that I danced around the top floor of the Dalton McCaughey Library whilst reading some of this stuff (there was no-one else around!!).  How exciting to read a critique of Enlightenment hermeneutics from those who have not had to endure the Enlightenment!  Of course, the same goes the other way – it’s easy for me to embrace Orthodox Theology when I only read about it in books! I’m sure the reality is as marred with sin as my own Western Protestant tradition!

However, I can see why Rowan Williams has integrated much of this hermeneutic.  The Orthodox tradition never lost the capacity to keep two poles of belief in tension, to believe two things can be true at the same time without competition.  The West lost that capacity in the late middle ages and the Reformation did nothing to address it.  I think it’s about ‘definitions’.  When we try and define things too tightly we confine them, and their meaning gets distorted.  Hmm… something coming to mind about wineskins… 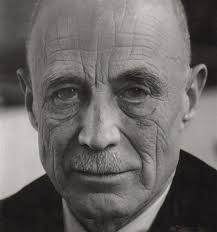 I’ve just handed in a ‘Reading Reports’ assignment where I had to summarise and respond to various set texts in order to grasp something of the global trends in theology in the twentieth century.  It may be a bit clunky, but I’ve cut and paste the assignment here to give you a paragraph on some key theologians from the past 100 years.   Several of the chapters set in these reviews are from the fat brick of a book that is the subject’s text: David Ford’s The Modern Theologians.  Post #2: H. Richard Niebuhr

Richard Niebuhr’s Christ and Culture is an attempt not at a thorough-going synthesis of the early twentieth century theological debates, but the establishment of a framework articulating the key hermeneutical question for Protestant theologians in his time. Nineteenth century Romanticism was no longer the dominant conversation partner with Enlightenment philosophy, and a distinctive Post-liberal approach was emerging. H.R. Niebuhr’s definition of culture as the ‘artificial secondary environment’ reveals a materialist preoccupation which Protestant theologians in the later half of the twentieth century were seeking to moderate with re-formed questions of subjectivity, experience and pluralism and was himself particularly influenced by Troeltsch. His five categories of Christ opposing; agreeing; synthesising; keeping in tension; and converting culture have been enormously influencial. However, they are limited by H.R. Niebuhr’s post-war context where there is no real competition for Christianity in the public domain.

So, what does all that mean?  It means that lots of late twentieth century protestant theology is captive to the debates and circumstances of it’s century .  Liberal protestantism produced some great insights about the complexity of Revelation and led us through the challenging transition towards a pluralistic religious environment.  But it’s birthplace was Modernism.  It’s context is Late-Modernism.  They now need almost as much translation as the Church Fathers, in order to draw out the relevance for our times.  Two very different 21st century US theologians have done some updating work with H.R. Niebuhr’s christ and culture categories: Catherine Turner points out Christianity is a culture in and of itself and requires critique.  Don Carson has written a book called Christ and Culture Revisited which I haven’t read.

I got really excited reading Tillich for the first time and H.R. Niebuhr for the first time in 20 years.  But after a while I realised it is the themes in this work that excites me more than their solutions.  There is still something very ‘definitional’ about their work (if that makes any sense) and I am glad to have them stashed away in my library bag – but need to keep on reading to get authentic answers for my own context.

I’ve just handed in a ‘Reading Reports’ assignment where I had to summarise and respond to various set texts in order to grasp something of the global trends in theology in the twentieth century. (If you interested you can link to the THL512 subject overview on the right hand panel.)  It may be a bit clunky, but I’ve cut and paste the assignment here to give you a paragraph on some key theologians from the past 100 years.   Several of the chapters set in these reviews are from the fat brick of a book that is the subject’s text: David Ford’s The Modern Theologians.  Well, here goes nothing… first up – Tillich (delicious!!)

Paul Tillich is trying to make sense of a German Christian theology that had been so accommodating to the Nazi regime. He has the benefit of the Schleiermacher – Barth conversation of the early twentieth century and now his integrative task seeks to answer the trauma of Christian conflation with such a violent socio-political system. He proposes a ‘correlation’ between that which is theological anthropology and that which is divine revelation. His Systematic Theology volumes lay out a resolution to this problem with a surprisingly socratic method: culture poses the questions to which Christian Theology provides the answers. By asking and answering some basic existential questions, Tillich outlines an understanding of humanity’s essential nature, the problem of estrangement from our essence and the spiritual dimension where healing and actualisation of our essence is possible. The essential nature of human beings is a finite system of transactions which strives to keep in balance a number of polarities. The first of these is a need for individualisation on the one hand and participation in community on the other. Another is the dynamism to the process of existence which is kept in tension with solid and static form. A third is freedom verses destiny. When these polarities tip off the scale to lose it’s opposite truth, we experience existential distruption. Only God – that which is experienced as pure essence without finite existence – has the capacity to unite human beings with the essence out of which they have been birthed. Living life with a spiritual dimension working towards self-transcendence seeks to achieve a balance in these polarities. Tillich primarily deals with Scripture as Revelation, as befits his German Protestant context but the presentation of scriptural truths is not the endpoint of theology. The application of Scripture to the questions and dilemmas of faith lived in the real world requires theology to be a critique of culture and context.